I'm not a fan of using dictionary entries to define terms, as I believe meaning is built on interaction rather than prescribed by a fixed rule book. That said, I do love etymology, as a sort of social history of words and concepts. And I figured that might come to rescue at this point of my research.

As I moved forward creating design research exercises to generate data and better understand the space I'm trying to occupy, I found myself struggling to explain what that space really was. I have for instance written that I'm interested in everything that should happen before materials are discarded. That would include fixing, adapting, combining and repurposing objects, to stay with only four activities. Are these four enough? I can't tell, and to be honest each time I tried I had a different list. Other attempts circled around "post-consumption material flows", or using a term I have explored previously, transformation of matter. But none of those forms would help others to understand the boundaries I was trying to define.

Some years ago, I found some friends/colleagues in Brazil were organising a series of events and called them "Café Reparo". That had obvious inspiration from the international network of repair cafes. Right now, by the way, I'm curiously reminded of a contact I had, perhaps about the same time, with another person who claimed she had the exclusive right to use the brand "repair cafe" in Brazil and how disappointed I was of learning that was even possible - I still think it's not. In any case, back to my friends, perhaps even unaware of their copyright infringement. The use of "café reparo" surprised me, as I felt "reparo" was not commonly used with that meaning in Brazil. "[um] reparo" can indeed be understood as "a fix" or "a mend", but at least to my knowledge the most common term is "a conserto", which to me feels similar to "a repair" in English. I might have discussed that with Leo Foletto by the time, and have the impression he may have mentioned that the fact that "[eu] reparo" can also mean "I notice" in Portuguese could be part of that decision (but again, this is only a recollection of a conversation I'm not sure even happened, so I might be wrong).

In an case, I have recently been struggling to find a term that would allow me to state in, say, less than ten seconds what it is I'm interested in. When I was playing with ideas for posters to invite people to the event I was organising with SCRAPantics here in Dundee, I even had two versions: "repair diaries" and "reuse diaries". "Reuse" has a broader meaning that could probably satisfy me, but it indeed has zero appeal. Repair feels a little more active. After consulting with my amazing co-hort of OpenDoTT fellows, I decided to stick with repair. 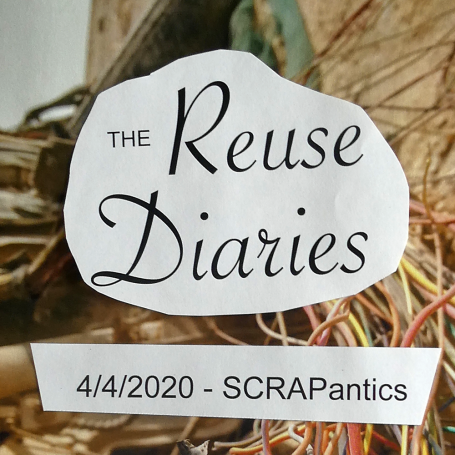 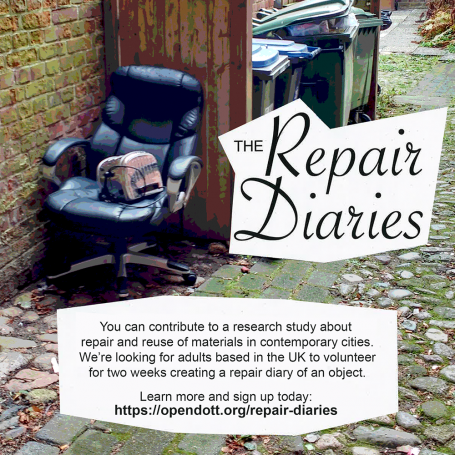 I am right now organising a research study which I'm calling a repair journey. Participants will spend two weeks creating a diary of an object they wish to repair, or have repaired in the past. And I found myself again unsure whether the term "repair" would be understood, and that was what led me to chase the etymology of the term.

From the Online Etymology Dictionary:

I think my main concern is to establish that I'm not only interested in getting broken things back to a previous functional state. Whilst that is obviously a central part of repair, I'm also willing to explore in what ways can materials that are inadequate for any reason - broken, failing, obsolete, ill-fitted, wrong-sized - be made valuable. The "re" particle is always a tricky one in that sense, as it implies a move back in time. But I like the way it relates to "pere":

For the time being, I'll keep using "repair" and try to make people understand this broader sense - not only about making a broken toaster get back to work as a toaster, but to see it as a piece of matter full of possibilities. What reminds me of old discussions I should try to reenact. But I'll keep that for future posts.