As part of the Repair Journey research study, I decided to apply to myself what I am asking participants to do. So upon asking them to keep a repair diary for what was originally meant to be two weeks, I started a diary myself.

Two weeks into it, it feels the duration is somewhat arbitrary. Amid all else happening in COVID times, I sometimes felt dragging my feet to work on the diary - perhaps for the expectation to make it meaningful and tiday. But I indeed made some progress.

Below are images of the first part of my diary about a bike (with a slightly edited transcription to ease the understanding of my notes and chaotic handrwiting), added of comments to show the sort of discussion I'm trying to elicit in the study. 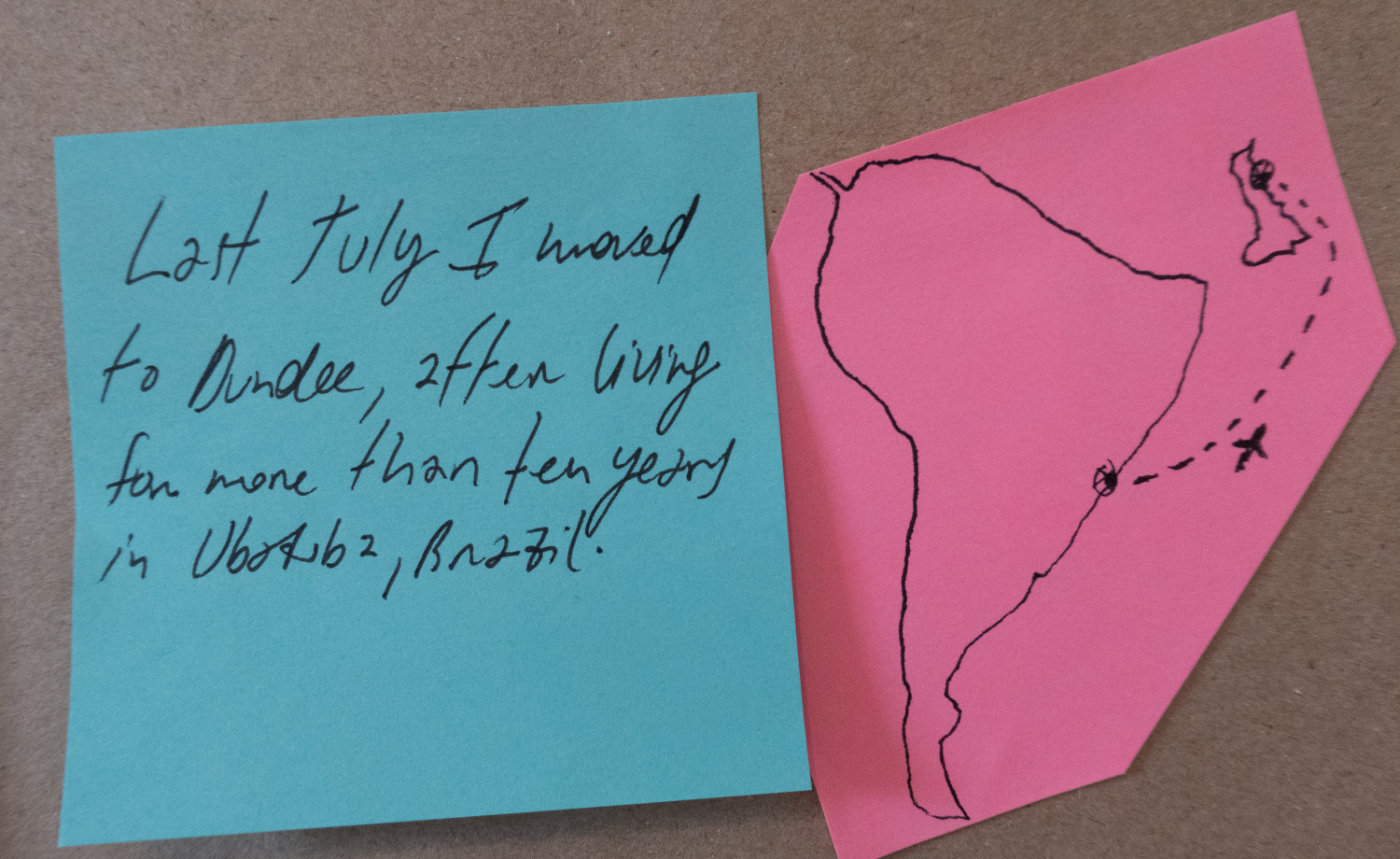 Last July I moved to Dundee, after living for more than ten years in Ubatuba, Brazil. 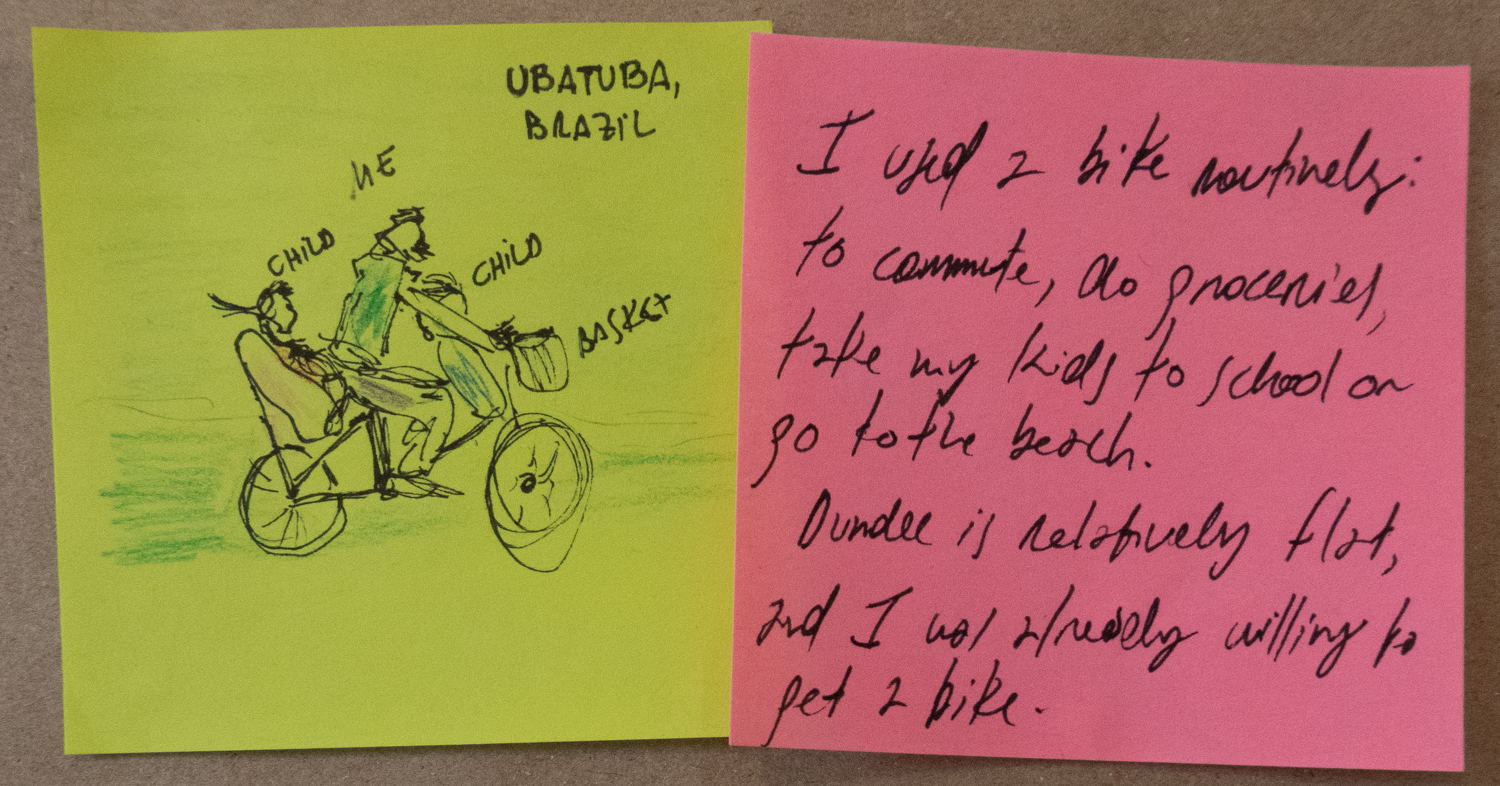 (In Ubatuba) I used a bike routinely: to commute, do groceries, take my kids to school or go to the beach. Dundee is relatively flat, and I was already willing to get a bike.

One day after my birthday in August (already living in Dundee), coming back home with my kids, I noticed a neighbour moving stuff out of her flat. I asked whether she was selling those things. She replied "no, a lorry is coming tomorrow to collect. Feel free to pick up whatever you want".

That was not a common scene from the little I knew of Dundee by then. Unlike what I had experienced when spending some months in Barcelona years ago - where every Thursday people in our neighbourhood would take out the stuff they didn't want anymore. Naturally, the Scottish weather does not favour simply putting things outdoors. But I missed the idea of having some sort of predictable way to get access to whatever other people were discarding. 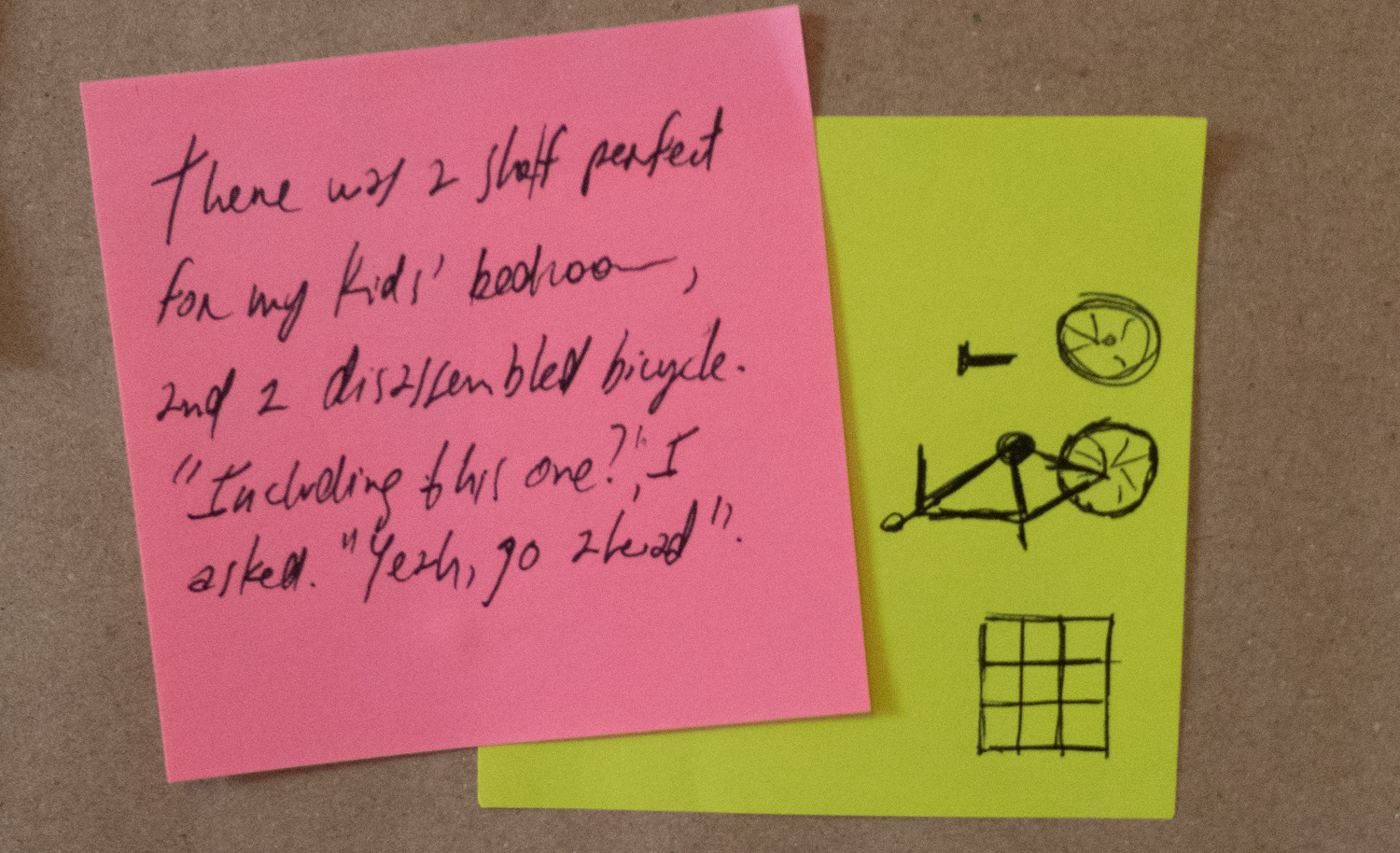 There was a shelf, perfect for my kids' bedroom, and a disassembled bicycle. "Including this one?", I asked. "Yeah, go ahead".

There you have it: a bike. I had already seen some on offer, in pawn shops or second-hand stores (Cash Converters, Right Buy U, Tayside Re-users) and websites like Gumtree or Ebay. But we could not decide whether to get bikes for the children first or the adults, or else to save money to get all at once and bargain for a bettter price. 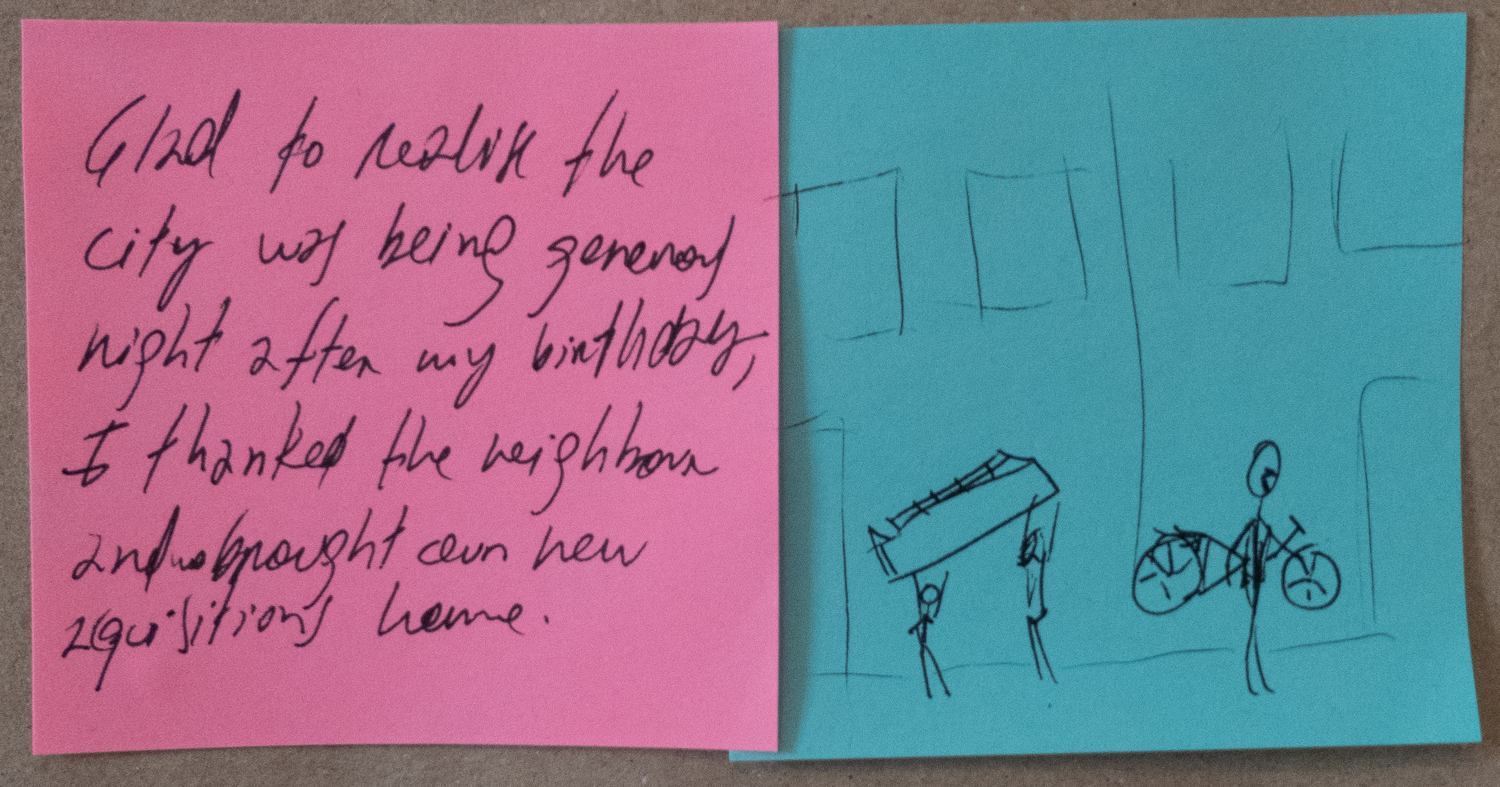 Glad to realise the city was being generous right after my birthday, I thanked the neighbour and brought home our new acquisitions.

I should naturally thank the neighbour for the generosity, but there is something to be said about the kind of collective abundance that only the urban environment can offer. If population density brings about a number of downsides, it allows also these kinds of opportunities.

That night I looked for the manufacturer and model on the internet, and found it was a hybrid woman's bike with very positive consumer reviews. Plus, I got it for the best possible price!

It wouldn't make much difference, as I was not paying for the bike, but researching on the internet made me aware that it was a decent bike instead of some throwaway knock-off. I am not a compulsive buyer: whenever I want to acquire anything meaningful, I read as many user reviews as I can. Sometimes it takes years between my first becoming interested in having something and finally deciding (and being able to afford) to buy. I must confess there is a sense of joy when I reach that point. But in the case of that bike, it was even greater, as it was freely given.

Next morning, I attached the seat and the front wheel. The bike felt fairly aligned, already. I could not ride it yet, as the back tire was flat. And I could not tighten the seat, as I had no tools yet.

There is an omission in this part of my diary, mostly for space restrictions but not only. I had no tools yet, but could easily borrow or even buy some. There is however another aspect to it: I know very little about assembling, setting up and repairing bikes. That is probably related to the fact that I only learnt how to ride a bike after growing up - at age 21 or so. So I was not experimenting with bikes as a teenager. The time I spent in Ubatuba, I would rely on the good and affordable service provided by the bike shops there.

Finally, even if I wanted to learn how to do those things myself (I bet there are thousands of tutorials on places like Youtube or Wikihow), I would have no room to do that. In São Paulo there are (there used to be, at least) cooperative/open workshops where one can take their bike and learn from others how to repair it, usually for a good price if any. They are not so much businesses as social and cultural spaces. I heard of no such thing in Dundee. What kinds of organisations are active around here?

I dragged what still felt as a half-dead bike through the streets of Dundee to the first bike service shop I found on the internet. I wanted to have it set up, buy a lock and install a child seat on the back. That shop proved to be too expensive for my taste, though it really looked professional and neat. But I could end up paying as much as I would in a second-hand bike with a seat already, so I gave up. 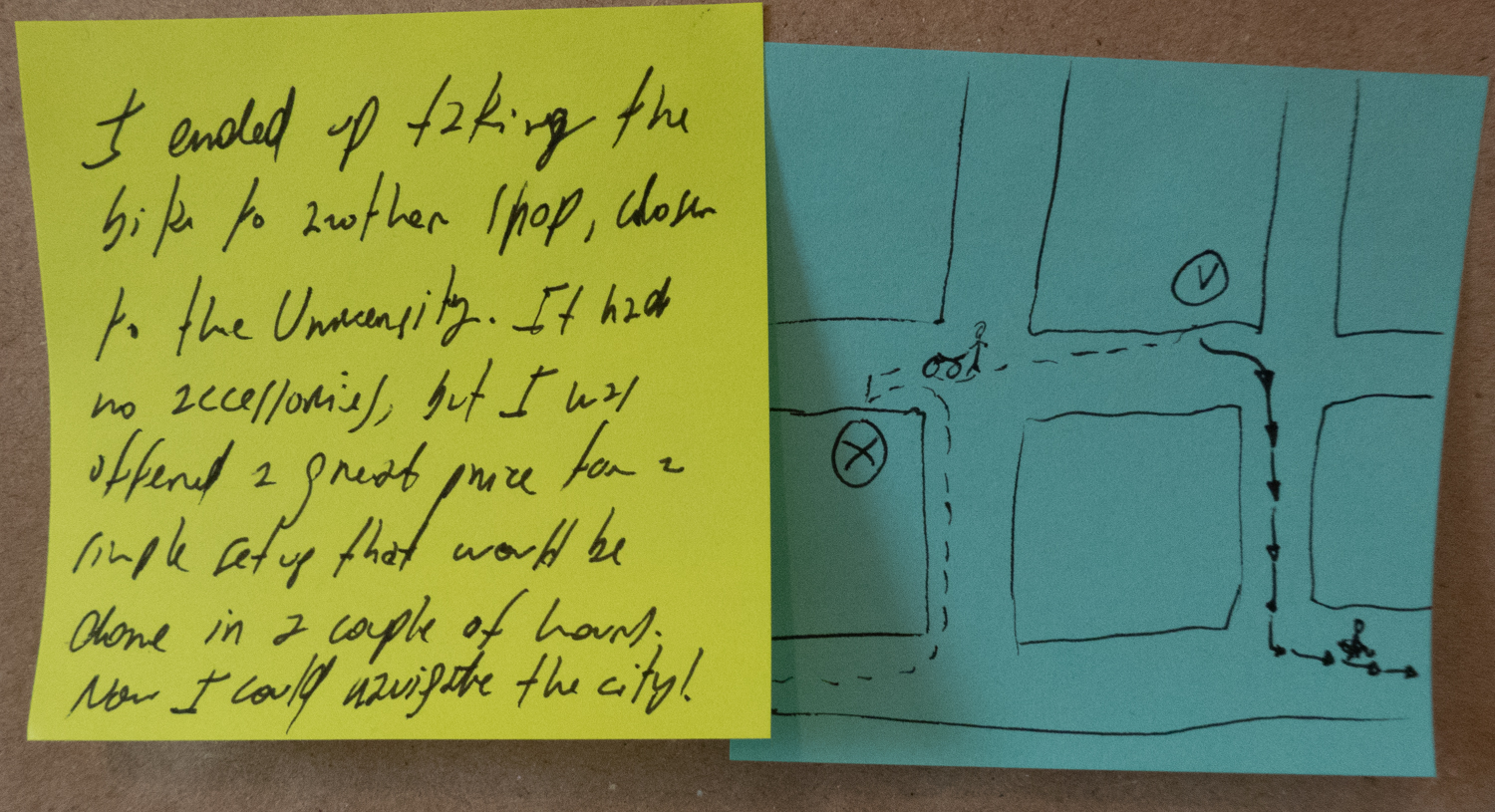 I ended up taking the bike to another shop, close to the University. Unlike the first shop, this one had no accessories on offer, but I got a great price for a simple setting up that was done in a couple of hours. Now I could start navigating the city!

Phase one of the bike repair diary completed. I still want to share two other episodes that may be relevant for the purposes of this study. I'll try to work on them in the coming days.